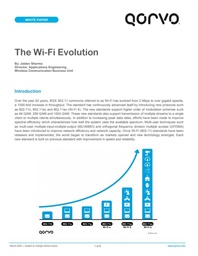 Over the past 20 years, IEEE 802.11 commonly referred to as Wi-Fi has evolved from 2 Mbps to over gigabit speeds, a 1000-fold increase in throughput. The standard has continuously advanced itself by introducing new protocols such as 802.11n, 802.11ac and 802.11ax (Wi-Fi 6). The new standards support higher order of modulation schemes such as 64 QAM, 256 QAM and 1024 QAM. These new standards also support transmission of multiple streams to a single client or multiple clients simultaneously. In addition to increasing peak data rates, efforts have been made to improve spectral efficiency which characterizes how well the system uses the available spectrum. Multi-user techniques such as multi-user multiple-input-multiple-output (MU-MIMO) and orthogonal frequency division multiple access (OFDMA) have been introduced to improve network efficiency and network capacity. Once Wi-Fi (802.11) standards have been released and implemented, the world began to transform as markets opened and new technology emerged. Each new standard is built on previous standard with improvement in speed and reliability.

Submit
Please agree to the conditions

By requesting this resource you agree to our terms of use. All data is protected by our Privacy Notice. If you have any further questions please email dataprotection@headleymedia.com .

In order to provide you with this free service, we may share your business information with companies whose content you choose to view on this website.